Then something happens that shatters our illusions and the Tower crumbles.

In The Tower card this sudden occurrence is symbolised by lightning striking as if God himself has metered out some divine intervention. The two figures being ejected from the Tower are symbolic of our dual nature.

In life there are two distinct way in which The Tower is experienced. One is when something unexpected happens to us and the other is when someone else deliberately undermines our personality and therefore damages and destroys our self confidence.

With the first example we directly experience this as a deep shock and trauma.  One man had the Tower as the initial central pivot point of his reading.  From the spread it was obvious that he had experienced such trauma that he now didn’t know who he was at all.  Literally he had lost his identity.  He explained to me that a few months ago his mother had died and that along with his three brothers, whom he was in business with, he had gone along to the reading of the will.  In her will his mother had declared that he was not his father’s child but the son of a family friend.

This had instantly been a shock for the man, but when his three brothers turned and pointed at him saying, “you are not blood, we do not want you in the business”, his world had completely fallen apart. In a matter of seconds he had lost his identity, his family and his work.

The first thing that this client needed was treatment for shock, so I recommended the Bach Flower remedy Star of Bethlehem.  The other thing that he required was time to assimilate the changes, lick his wounds and recreate his feeling of I am.

Here are a few examples of when I have seen the Tower depict shock. Finding out that one’s partner is having an affair.  Sudden loss of a loved one.  Accidents.  Divorce.

For many people the break up of a long term relationship results in The Tower.  One’s identity has been built on being that person’s partner, on the shared friendships, the shared dreams and the shared income.  With the loss of the relationship comes the loss of everything else.

Shock shuts down the heart chakra.  This creates feelings of numbness and an inability to experience emotions. In tarot the heart chakra is symbolised by the Ace of Cups.  Often you will find the Ace of Cups reversed close to The Tower card in a reading symbolising the broken heart.  If the trauma is recent then this is a very natural reaction, but if the trauma is from years ago then it symbolises that the individual has not yet been through all of the stages of grief. Often crying is what is needed, and you will often find that a person stuck in shock has not yet cried, or cried enough, over their loss.  This sensation of letting go is symbolised by the Star Card.

The other side of The Tower is when one person deliberately sets out to undermine another.  The cause behind this is often jealousy or, if the two people are in a relationship, fear of abandonment.  This fear is rooted in the unconscious idea that if the partner achieves more then they will no longer want to be with someone who is not so worthy.  In a reading see if this Nine of Coins reversed is close by as this often symbolises a person who fears being abandoned and is highly insecure.

I have seen this in readings when either a husband or wife has criticised or put down their partner over and over again.  Instead of the Tower blasting down in one fell swoop it is like someone slowly chipping it away, bit by bit.  The partner takes on the role of God and will often say things like, “if only you did this or that,” “I don’t think you’re capable”, “You’ll never achieve that.”

Many people live within these abusive relationships until they quite literally reach breaking point.  Often people suffer them for many, many years, the ego identity too crushed to believe that they would be capable of making it on their own.

I have also seen this side of The Tower in both work situations and teaching situations. In both cases it often occurs due to inherent jealousy.  In a reading the Three of Swords will depict the jealousy and bad feeling coming from the person who is undermining the individual.

Sad as it is I have often done readings for people who are studying on their spiritual path and it is their tutor, or master, who is undermining their abilities.  These types of teacher fear that the student will surpass them and somehow steal their glory.  When I see this in a reading I know that the spiritual student has great capability, otherwise the master would not fear them making progress.  It also happens in educational establishments of all sorts, again where the teacher has to “know best”.  In this kind of situation look out for the three of coins close by, as this symbolises teachers and teaching.

When the Tower is taken to symbolise the past and childhood it can depict either childhood abuse, generally of a mental of “smacking” type, rather than sexual, or birth trauma.

With childhood abuse the Tower depicts blows to the body or ego identity, and only specific surrounding cards would indicate that the abuse had a sexual nature.  These shocks get stored in the body, create post traumatic stress and also long term feelings of inferiority.

Shock from birth trauma can not only create feelings of inferiority but also  contribute to a long term sense of  loss, grief and a sense of “not belonging”.  Very often such people find it difficult to find a sense of fulfillment within their lives and underestimate their own achievements.

Interpretations for tarot cards adjust and metamorphose with the age in which we live, and in recent years the Tower has come to represent the dramatic destruction of the twin towers on Sept 11th. I most certainly did not foresee the tragic events, although for about two months leading up to Sept 11th I had a lot of clients laughing when I looked into their futures and judged that they would not travel, not perform, that their company would not be worth half as much in a few months time, and so on.

After the events of Sept 11th I have seen the Tower in readings for people who have been influenced and affected by the terrible events. Even though I live in the UK some of my clients lost loved ones, while others have had their working lives changed due to the world events which followed. 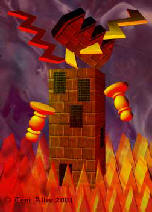 Throughout our lives we all strive to obtain and retain a sense of self and individual identity.  This starts at The Emperor and our feeling of I Am.  We draw people, places and things to us that help us to maintain what we believe to be our identity.  Piece by piece, brick by brick, we build this ego personality, which here in the Tower is represented by the Tower itself. 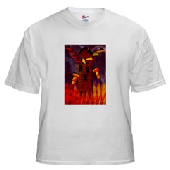