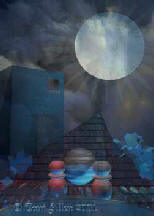 In the foreground of the Moon card you will see a crayfish in a pool of water.  It is said that this is  stagnant water, and when water is putrid nothing can live in it.  Water symbolises the emotions so here we are referring to stuck or painful emotions.

The crayfish symbolises the individual. Each of us has a hard ego shell which we erect to protect the self, in the misguided belief that it can damaged or hurt.  In truth it is only the ego which experiences pain. Due to the impurity of the water the crayfish must leave or it will die.

Beyond the water we see the path that the crayfish (oneself) must follow in order to go past the Moon to the Sun which shines behind it.   On the path one initially encounters two dogs which symbolise those who would like us to stay as we are and will therefore try and force us to remain in the stagnant emotions.  Beyond the dogs are two towers, one already damaged.  These represent false ego identities which one might be tempted to try and hide in along the way.  Beyond the Moon is the Sun, and a promise of hope and “light at the end of the tunnel.”

In a tarot reading the Moon card represents fear.  However painful the negative emotions, or emotional situation, might be it it is always terrifying to break out  from a habitual way of being.  Stagnant water creates bondage.

A prime example of the Moon card in practice is when someone wants to leave a negative relationship.  The first thing they do is go and discuss it with their friends (the dogs) who come up with a list of obstacles and reasons why they should not leave. “What about the children?” “How will you afford to do that?” “Where will you go without any money?” “You must stay and give the children a father.”   All of these arguments push the questioner back into the stuck emotional situation, now compounded by added fears and uncertainties that they are bound to fail.

Terror roots us to the spot.  As the emotions experience further damage we become more fearful and less able to take the initial step towards change.

Once past the dogs we might hide in a false ego of okayness until we have the courage to take the final step and experience happiness again.

When the tarot Moon card appears in a spread there is always fear.
Sometimes it is quite literally a fear of the dark, or a fear of the unknown, but always a fear based on a previous negative emotional experience.

One client whom I worked with for many months always had the Moon card prominent in her readings.  She was convinced that she was being watched in her house at night, that someone might be prowling in her garden and a threat to her.  Always the cards came up with the Page of Swords, a devious character, and always the cards pointed towards it being someone she knew.  Every time she feared the “watcher” she phoned her boyfriend to come over and stay, and the fear held them together, bonded them into a co-dependant relationship.  “I don’t want him staying all of the time,” she said, “But I’m too frightened to be on my own.” Everything pointed towards the culprit of her night time fears being her boyfriend but for many months she remained in denial, unable to believe that her rescuer might in fact be her stalker.  Friends encouraged her to phone him, have him stay more often or go and live with him.  Eventually she caught her boyfriend out and proved that for many months he had been deliberately creaking and crunching outside in the middle of the night so that she would become dependant on him.

Not everyone’s Moon card experience is so macabre, yet we all feel the same intensity of fear, whether it be changing jobs, taking a driving test, or moving home.

When the tarot Moon card is reversed one feels unable to face the challenge of fear.  There is usually what I call a “yes but” situation.  I saw this for one woman who was nursing her elderly mother and had become totally trapped, even to the point of hardly ever being able to leave the house.  “Yes, but if I put my mother in a home all of my inheritance will be eaten up,” she said.  “I live in my mother’s house and I will have to sell it to pay for her care and have nowhere to live.” The fear of poverty and destitution kept her trapped in an emotionally fraught situation.

Fear creates illusion.  When frightened we are more likely to imagine the worst.  Moonlight literally takes away all of the colour from life and leaves us only with black and white.

When we experience the fear of the Moon card we need to take courage, ignore our well-wishers and tread our own path, for only we know, in our own hearts, what is right for our highest good. 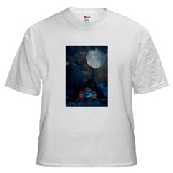